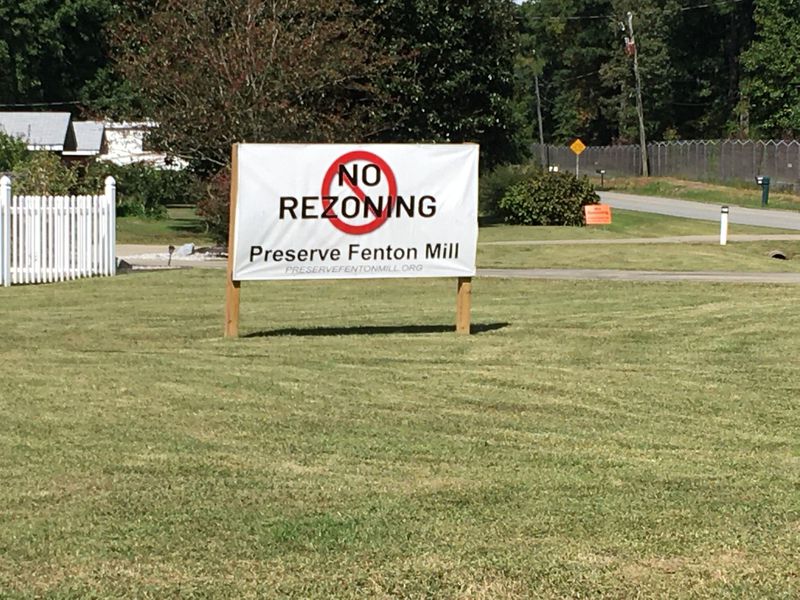 The developer who wants to build on a large swath of upper York County has altered the initial plan, dropping the number of proposed homes by more than 200 and taking out the commercial component.

Developer Lamont Myers, one of the owners of Fenton Mills Associates LLC, submitted a new summary of his plans to the county on Sept. 25. He said the new plan is intended to maximize open space and generate less daily traffic than the previous plan.

“We’re very excited where we’ve ended up,” said Myers, of Mid-Atlantic Communities. “We tried to listen to everything our neighbors told us, and try to accommodate that and still do a nice project.”

The planned development would affect about 400 acres of undeveloped land south of Newman Road in upper York County, between Fenton Mill and Barlow roads near Interstate 64. The initial application to rezone the land — submitted to the county planning commission in the spring — called for a mixed-use development with 506 single-family houses, 230 townhouses and 100 age-restricted “active adult” units. The plan included 40,000 square feet of commercial space as well as community clubhouses, a swimming pool, playgrounds and community gardens. It also set aside 16 acres for a new school site.

The potential rezoning immediately upset many longtime residents, who are worried that large-scale development will affect the remoteness and natural beauty of what they see as one of few remaining rural corners of the Peninsula. Residents have since formed a grassroots group called Preserve Fenton Mill, which to date has more than 1,400 followers on its Facebook page.

Residents have also formed another new group, the Conserve York County Foundation, to be the parent organization of Preserve Fenton Mill and to help influence how future development in the area is approached. The foundation has applied for nonprofit status. There’s also a GoFundMe set up to raise funds for yard signs and banners, car magnets and other advertising.

“It’s not that we’re opposed to all rezoning,” said Darci Tucker, one of the grassroots group’s leaders. “We want to slow down the dramatic development to protect the area. We are in favor of development if it is done properly. We’re not just a ‘no-no-no’ group. We’re a ‘let’s do this responsibly’ group.”

Following the submission of the rezoning application, the developers met with residents numerous times. Tom Chamberlain, another of Preserve Fenton Mill’s leaders, said the meetings have been cordial and reflected a willingness by the developer to listen.

The revisions in the summary submitted to the county list several changes including:

Total residences reduced from 836 to 599, with the number of town homes reduced by more than half and relocated.
Forty-thousand square feet of commercial space was eliminated.
The dedication of 68 acres to York County for its future use, including 16 acres that could accommodate a future school site.
Preservation of park and open space along Newman Road.
No traffic added to Barlow Road between Newman and Fenton Mill roads.
Larger lots and enhanced buffers adjacent to Skimino Hills.

Myers said the entire Newman Road frontage will be preserved and maintained as a landscaped, 4.5-acre park with a pond. All in all, 60% of the entire site will be green space, he said. The project creates no more traffic than if developers were to put up 288 homes and 50,000 square feet of commercial space, which is allowed by right as the property is currently zoned, Myers said.

“We’re cognizant of the fact that we’re at the front door to York County now,” he said. “From a visual standpoint, people won’t even know it’s there. They’ll just see a beautiful park.”

Preserve Fenton Mill leaders were cautiously optimistic about the changes, which Chamberlain called “an improvement.” On the group’s Facebook page, though, the new concept of 599 homes is called “simply too many.”

Chamberlain said the group will wait to release an official position until submission of a revised proffer, which spells out the conditions the developer will follow to mitigate or avoid anticipated negative impacts that could be enabled by the rezoning.

Myers said Monday that the revised proffer is still being worked on but should be submitted soon. As of Friday, it had not been posted on the York County website.

There are a few issues Chamberlain said he’d like to still address, such as the offer of donated land to York County. Instead of giving land to the county, which could potentially develop it, he said, the group would like to instead see at least 50 acres donated to the Historic Virginia Land Conservancy to ensure protections.

The group is also still concerned about how new development might affect the need for new schools and fire stations. Though the revision removes a school site from the plan, it does give land to the county for a potential new school, if needed later. Other worries include increased taxes, environmental damage and altering the character of upper York County.

“This is bigger than one development,” Chamberlain said. “There’s a bigger picture that we need to be looking at.”

The Fenton Mill project is anticipated to be heard by the York County Planning Commission at a public hearing Nov. 18. It could potentially go before the county Board of Supervisors by the end of the year.