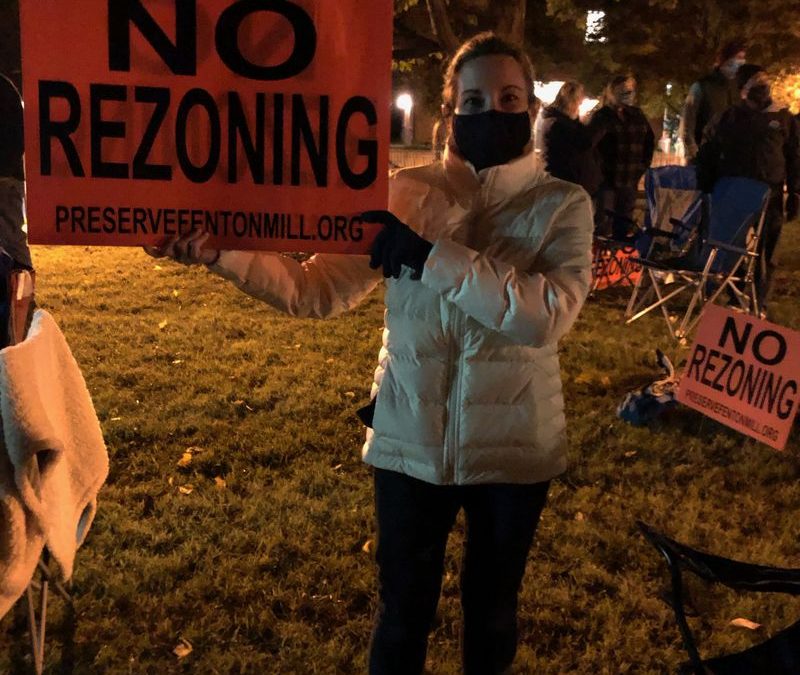 More than 20 years ago, Laura Lawrence saw a brochure encouraging visitors to a rural area of Virginia, where one could live among the eagles, bluebirds, farms and winding roads.

That brochure for Skimino Landing Estates helped Lawrence and her husband decide to move to the upper part of York County, where they still live today.

“They described the area as special because of its natural views, undisturbed nature and secluded privacy,” Lawrence said. “That’s the way we’d like to keep it. The advertisement was accurate. The Fenton Mill area is special.”

For now, it looks like it may stay that way.

A grassroots group that has been working to keep the area from a massive development project won a victory this week when the York County Planning Commission declined to approve a rezoning proposal that would allow the building of 599 houses in the upper part of the county.

After a three-hour public hearing Wednesday, the commission voted 6-0 against a petition to rezone about 376 acres of undeveloped land south of Newman Road in upper York County, between Fenton Mill and Barlow roads near Interstate 64. The vote came after months of back-and-forth between the developer and residents, who launched a campaign against the project in the spring.

The application will still go before the York County Board of Supervisors, but now with the Planning Commission’s recommendation against the rezoning. Commissioners, also following the recommendation of the county planning staff, unanimously said the proposed development would not have followed the county’s comprehensive plan.

Commissioner Mary Leedom said the developer seemed to disregard the comprehensive plan, which provides a foundation for the future of the county in terms of goals and land use.

“We have controlled growth, long-range plans and we need to take that into consideration,” Leedom said.

The application to rezone the land from rural residential and limited business to planned development residential, or PDR, was submitted in the spring by Fenton Mill Associates LLC. The proposal called for a mixed-use development with 506 single-family homes, 230 townhouses and 100 age-restricted “active adult” units. The plan included 40,000 square feet of commercial space as well as community clubhouses, a swimming pool, playgrounds and community gardens.

After meetings with residents, the developers altered their proposal, dropping the planned number of homes by more than 200, taking out the commercial component and dedicating 68 acres to York County for future use, including 16 acres that could accommodate a future school site.

But residents said 599 homes were still too many. By right, as the land is currently zoned, a developer can put up 288 homes and 50,000 square feet of commercial space.

“I’m a little puzzled because this is one of the least intensive rezoning applications in York County history,” developer Lamont Myers, one of the owners of Fenton Mill Associates, said Wednesday. “We want to do this right. We think this property deserves it.”

The proposal, however, pushed the community into action, leading to the formation of a grassroots group, Preserve Fenton Mill, as well as a nonprofit, the Conserve York County Foundation, to help influence future development in the area. More than 500 residents in the area signed a petition opposing the project, and bright orange “No rezoning” signs and bumper stickers showed up on hundreds of lawns and cars.

“This proposal awakened a giant,” said Darci Tucker, one of the leaders of Preserve Fenton Mill, which to date has about 1,500 followers to its Facebook page.

Wednesday, about 100 residents gathered outside York Hall, bringing folding chairs and blankets to wait out the hearing, which only allowed so many people in at a time because of COVID-19 safety protocols. About 30 people spoke, with only three in favor of the plan — local builders who said they hoped to benefit from the project.

Speaker after speaker talked of concerns such as increased traffic on narrow roads, stress to emergency services, increased burden on the schools and negative effects on environmental habitats. Portions of upper York County still farm, including the 80-acre farm that’s been in Andrea Wilson’s family since 1939.

Five generations of Wilson’s family have farmed, she said, raising cows, pigs, ducks, chickens and bees — they’ve been “stewards of the land” and hope to pass their knowledge to the next generation.

“We in upper York enjoy a quiet, simple peaceful rural way of life,” Wilson said. “This proposed development, homes placed on tiny lots, nearly 600 homes, goes against the very appearance and rural lifestyle that those of us in York County proudly call home.”

The Preserve Fenton Mill group has stressed that it doesn’t oppose all development, but supports growth that is guided by the comprehensive plan, taking into account environmental, traffic, financial and citizen concerns, according to Tucker.

“This proposal does not meet that criteria,” she said.

As the hearing wound down Wednesday, board chairman Michael King noted that turning down the proposal wouldn’t mean that the area would remain fields forever. But he said he didn’t see enough to convince him that the plan was “the prime development that the county deserves” and hoped more work would go into it.

“This could be a quality development at the end of the day,” King said. “I would like to see that as opposed to a by-right where the citizens get zero out of this.”

The day after the hearing, Myers said the development team was disappointed but planned to regroup and decide how it would move forward before the proposal goes to the Board of Supervisors in January.

The Preserve Fenton Mill group is still willing to meet with the developer, said Tom Chamberlain, another of the group’s leaders. They’re willing, he said, to continue to make sure the citizens’ voices are heard.

“We’ve learned a grassroots group can do anything,” Chamberlain said. “We can fight for what we believe in and take on the Goliaths out there who have gotten their way.”